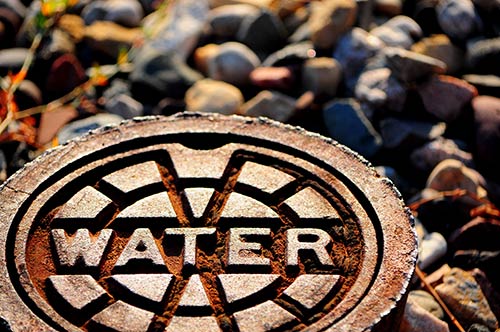 The Richland Center Water Utility strives to provide a reliable and safe source of potable water to its customers. It all started in 1880, when fire protection became a big concern for city fathers, businessmen and the citizenry. Having running water in the home appealed to many as well and our Water Utility was born. Not many records exist from those early days but today our water facilities consist of three operating wells, two reservoirs, each with a half million gallon capacity, and 37 miles of pipe in the ground.

Five wells from the earlier days have been retired. Currently the three operational wells are: Well #6, which is in the North Industrial Park and pumps up to 1,100 gallons per minute (GPM), Well #7, which is near the Wal-Mart area and pumps 1,000 GPM, and the newest, Well #8 on Hwy 14 near the high school and pumps 1,200 GPM.

In 2009 approximately a half a billion gallons of water was pumped to the reservoirs. The least water per day was 553,000 gallons while the highest use was 2,533,000 gallons. The distribution system has some thirty seven miles of watermains and range in size from 2” to 14” in diameter. 785 valves provide isolation control of the system.

There are 356 hydrants in the system that are used for flushing and fire protection. The utility has installed and maintains over 2,400 meters insuring accurate and equitable sale of the water. By making regular improvements to the system, our community has benefited by receiving a fire insurance rating of ISO Class 3 which means lower rates for the Residents, Business, and Industry.

The maintenance shop was relocated to the North Industrial Park in 2002 and houses the department’s vehicles, excavation equipment and repair parts.

There are a number of signs that a toilet needs some repairs, but many toilets leak without conspicuous indications of trouble.  Here are some of the more obvious signs of a leaking toilet:

*** Any sounds coming from  a toilet that is not being used are sure signs of leaks.

*** If you have to jiggle the handle to make a toilet stop running.

*** If you have to hold the handle down to allow the tank to empty.  This can also mean the chain or strap is too long and doesn't lift the flapper or ball high enough to float on its own.

*** If water drips out of the refill tube into the overflow pipe. (also under the lid)

*** If a toilet turns the water on for 15 seconds or so without you touching the handle, this is otherwise known as the phantom flusher.

However, even if your toilet doesn't have any of these symptoms, it's still possible that it is leaking.  These leaks are known as SILENT LEAKS, because they usually go undetected.  There is an easy test you can do that will positively tell you whether or not your toilet is leaking.  And if the test shows that the toilet is leaking, there is a second test that tells you what part inside the tank is responsible and needs fixing.

Remove the cover on the toilet tank and carefully set it aside so it can't be accidently knocked over and cracked.  Take off the lid of the tank and if you see water running over the top of the overflow tube, you definitely have a leaking refill valve. (or the float is out of adjustment)  If you are unsure whether or not water is running over the top of the overflow pipe; sprinkle talcum powder on top of the water in the tank, and you can clearly see whether or not it is.

Remove any "in-tank" bowl cleaners that color the water and begin the test with clear water in the tank as well as in the bowl.  You'll need some dye.  Food coloring or instant coffee works fine.  Wait 30 minutes and make sure nobody uses the toilet.  In 30 minutes if you find any of the dyed water is now in the toilet bowl -- your toilet is leaking.  A properly operating toilet will store water in the tank indefinitely without any water running into the bowl.

So for now, let's say you've done the dye test and found your toilet is leaking, you now have to find out which part is the culprit...the flush valve (flapper at the bottom of the tank) or the refill valve.